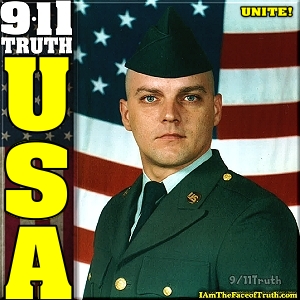 I am glad to be a part of this campaign to spread awareness of the fraud of 9/11 and encourage anyone reading this to join us.

I was asked to join the “I Am the Face of Truth” for 9/11 Truth campaign by my good friend Claudio Marty in 2014.  I had already been questioning the official story of 9/11 since soon after it happened and things just didn’t add up from what the government said about it.  Having done a lot of research over the years, and realizing the truth was being covered up, I just couldn’t allow myself to be a part of all the lies. The “I Am the Face of Truth” campaign has allowed me to be part of many great and intelligent people who also know the official story of the events that day is full of omissions of obvious truths and outright lies.
I am glad to be a part of this campaign to spread awareness of the fraud of 9/11 and encourage anyone reading this to join us by having a banner created for you to use on social media.  It is past time for a real investigation, true justice, and to correct our corrupt government on the disastrous path it has taken.
All leaders should honor their oath to support and defend the Constitution of the United States against all enemies foreign and domestic, and should not subject people to mass murder scams for the greed of the elite.  Thank you, and truth up! -Michael Atkinson, U.S. Army Veteran

I realized very early on after 9/11 that the destruction of WTC 7 was a very obvious controlled demolition that took much planning. It took many days to rig that building like that, as anyone can plainly see it being imploded onto itself all at once.  In my opinion, something didn’t go as planned for the real crooks of 9/11, and they decided to go ahead and also bring this building down right in front of all the surrounding people in NYC.
Afterwards, the owner of the WTC buildings, Larry Silverstein, admitted on mainstream TV news that they decided to “pull it”. Later, the story from the government was that this building collapsed due to office fires. What an obvious lie that was to me. After discovering Architects and Engineers for 9/11 Truth, I then realized that, yes, WTC Towers 1 and 2 could also only have been brought down after the plane impacts like they were with explosives of some kind inside the buildings.
After realizing the information from the many 9/11 Pilot Whistle-blowers, it is a strong possibility that those planes were remotely controlled.   The official story has been questioned by members of the US Congress and retired high-ranking officers of the US military. Even Max Cleland, former Senator assigned on the Commission to investigate 9/11, resigned, condemning the entire exercise as a “scam” and “whitewash”.
The Veterans for 9/11 Truth mission, simply put, is to save the United States of America and to defend it from all enemies, foreign and domestic. To that end, we seek to restore true values, integrity, honesty, and leadership in government at the local, state and national level. We are opposed to tyranny and corruption. We seek to move this Nation from a state of perpetual warfare to a state of prolonged peace and prosperity.

September was a busy month for most 9/11 Truth activists!

“On Saturday September 24th I hosted a 9/11 truth booth at WellsFest 2022 in Jackson, MS where I had previously hosted one with great success in 2019. This was a music event – a festival every year where there are top musical talent on two stages, food trucks, children’s activities, arts and crafts vendors, and more. There’s a Pet Parade where children and their parents walk around the event grounds with their pets leading the way.” — Michael Atkinson
RichardGage911.substack.com/p/successful-september-11th-outreach 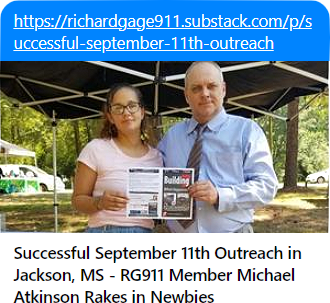 Links to some of the best information about 9/11 online

The 23-member 9/11 Consensus Panel is building a body of evidence-based research into the events of September 11, 2001.

This 50-page primer provides a comprehensive overview of the evidence regarding the World Trade Center destruction and a careful examination of the hypotheses that researchers have put forward to explain what caused it.

9/11 Commission Deceived: An Unintentional Work of Fiction Based on Cheney’s Torture Program

NILA SAGADEVAN ~ 9/11 : The Impossibility Of Flying Heavy Aircraft Without Training

The So-called War on Terror Is A Criminal Fraud
By Prof. Michael Keefer  The US Constitution and Bill of Rights have been displaced by War-on-Terror legislation.

Is Washington the Most Corrupt Government in History?
By Paul Craig Roberts  “Think about this. The bin Laden story, including 9/11, is fake from start to finish, but it is inscribed into encyclopedias, history books, and the public’s consciousness.  And this is just one example of the institutionalized mass lies concocted by Washington and the presstitutes and turned into truth.”

Dr. Alan Sabrosky, Demystifying 9/11: Israel and the Tactics of Mistake.  By Christopher Bollyn

Video: 9/11 and the Global War on Terrorism
By Prof Michel Chossudovsky and James Corbett

Amply documented but rarely mentioned in news reports, is the fact that ISIS is a creation of US intelligence, recruited, trained and financed by the US and its allies including Saudi Arabia, Qatar, Turkey, Israel and Jordan. – Michel Chossudovsky, Canadian born writer and professor, September 30, 2015 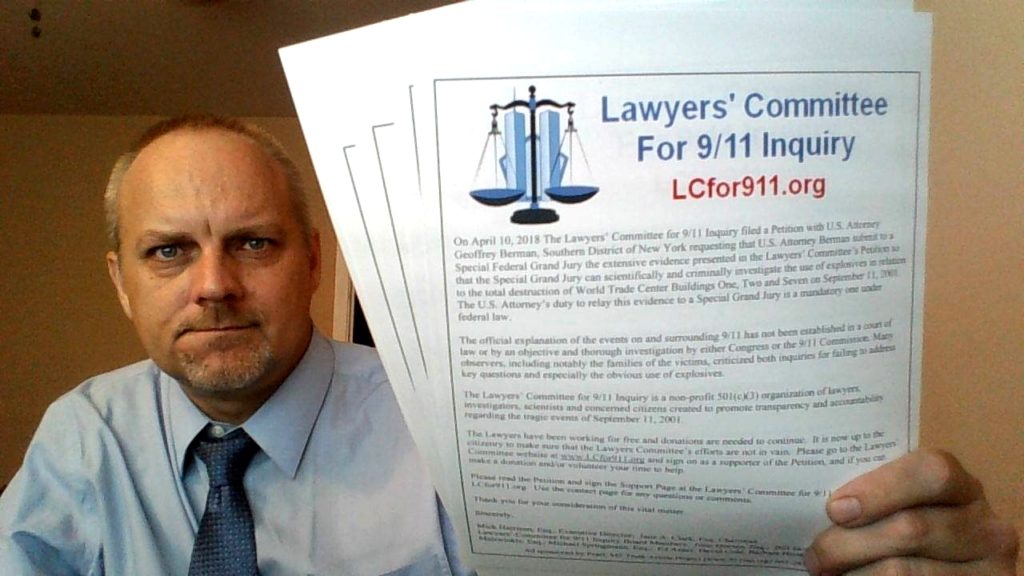 “We Are The Worldwide Grassroots 9/11 Truth Movement”
Stick to that ‘a crime was committed and we want justice.’
Our job now is to awaken the general public.|
https://michaelatkinson.substack.com/

9/11 Is the Litmus Test  /  9/11 Commission Report bars 503 1st responder eyewitnesses.  The 9/11 Commission ignored the 12,000 pages of eyewitness testimony.  /  Most of the 9/11 Commissioners don’t buy the official story of 9/11/01, and neither do I.  /  Barbara Honegger breaks the scientific evidence of the fraud of the Pentagon “attack” down.  She exposes some of these “neocon Zionists” related to the fraud of 9/11/01.  This video is really long but worth it.

reach out to me Jackson, Mississippi USA

CALLING ALL MISSISSIPPI ACTIVISTS FOR 911 TRUTH!   Like to network with fellow advocates in my area.  We need to get to know each other, help promote ALL activist activities within our location. If you are hosting or want to create an event, let me know.  We need to support each other’s efforts and get our numbers to grow.

CALLING ALL MISSISSIPPI ACTIVISTS FOR 911 TRUTH!   Like to network with fellow advocates in my area.  We need to get to know each other, help promote ALL activist activities within our location. If you are hosting or want to create an event, let me know.  We need to support each other’s efforts and get our numbers to grow.  Please visit