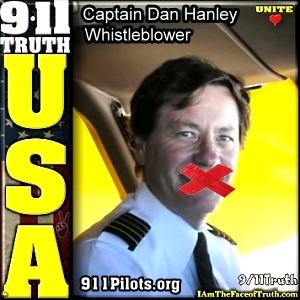 To the FAA and the US Department of Transportation

Dear FAA Administrator Dickson,
I write to your good office today regarding our grave concern over the apparent stonewalling by the FAA of a federal report submitted via the FAA Hotline.
I currently serve as director and international public spokesperson for a global grassroots effort called 9/11 Pilot Whistleblowers whose website is at www.911pilots.org and YouTube channel at 911pilots.

The purpose of our organization is to show that there were no Muslim hijackers at the controls of the 9/11 aircraft but that the aircraft were electronically hijacked through employment of a system called the uninterruptible autopilot that enables a remote source to take complete control of the aircraft autopilot and flight management computers and guiding it to its target destination. Once engaged, this system cannot be disconnected by the pilots.
Our goal is to recruit retired and active military and civilian pilots from around the world to be interviewed attesting that not only could the inexperienced alleged hijackers not have flown the 9/11 flight profiles but that they could not have flown the profiles themselves. We allege that the aircraft were electronically hijacked and guided to their targets on 9/11.

In August 2020, I filed a report via the FAA Hotline alleging the above with very strong supporting evidence requesting that the FAA commence an immediate investigation into our assertions as the very existence of this system severely and negatively impacts the safety of passengers and aircrew alike on commercial jet aircraft.
In September, I received acknowledgement of receipt of these materials by the FAA Hotline Team and a case number S20200617032 was assigned.
Shortly thereafter, I received an email from Seattle-based FAA aeronautical engineer Paul Siegmund advising me that he would be my point of contact while requesting that we arrange a 3-way call with his associate office worker, Mike Millage, the next morning. The next day, I received an email from Mr. Siegmund advising me that, due to the depth of material submitted to the FAA, his office would require additional time to digest the material so I called him and we briefly discussed this evidence. This was the last communication that I had with him. Subsequent phone calls and emails to him went unanswered.
Consequently, I emailed Mr. Sieigmund’s supervisor in DC, Michelle Moore who oversees the proper administrative disposition of FAA Hotline Reports, to complain of the apparent stonewall of this case by Mr. Siegmund. Rather than respond, the case was returned to the FAA Hotline office.
Subsequently, I received an email from the FAA Hotline office advising me that the issues that I addressed had already been resolved through the response of two previously submitted FAA whistleblower reports, WB18616 and WB 0979, one of which I obtained through the Freedom of Information Act, WB 18616 that was totally irrelevant to the issues concerned. WB0979 did not exist.
Undeterred, I responded with an email simply requesting that I be provided with a specific name, phone number, and email address within the FAA Hotline Team that was overseeing the disposition of this case but received no response from this email or subsequent requests for this information. I have repeatedly requested that my case S20200617032 not be closed pending receipt of much information and evidence.
Frustrated at the apparent stonewalling of this very important issue, I phone contacted the Department of Transportation Inspector General Chief Compliance Officer Scott Harding to file a complaint regarding the apparent stonewalling of my report by the FAA Hotline Team and others. Mr. Harding informed me that it was outside his jurisdiction to intervene in this matter.
I have twice emailed your office at steve.dickson@faa.gov but received no response and thought that perhaps this email address was incorrect so I decided to write this certified letter to your office instead.
9/11 was the greatest crime ever committed on American soil in its history, a crime that has never been criminally investigated. The 9/11 Commission did not constitute a criminal investigation. I have written to the Department of Justice Assistant Attorney General – Criminal Division and have phone contacted the FBI headquarters regarding this matter while requesting that these offices join legal hands with the FAA in pursuit of a thorough investigation of the issues at hand but have received no response.
Hopefully, I will receive a letter response from your office to this important correspondence.
I currently live in Islamabad, Pakistan where I have resided for eleven years with my Pakistani wife. I may be reached via email at captaindanhanley@gmail.com, by phone at +92 300-555-0644, or at the address listed above. For additional information about me, kindly Google “Captain Dan Hanley” or visit our website at 911pilots.org.
I will patiently await your response.
Very respectfully,
Captain Dan Hanley (retired)
Director – 9/11 Pilot Whistleblowers
Islamabad, Pakistan
CC: FAA Hotline Team
Scott Harding – DOT IG Chief Compliance Officer
Dave Meiswinkle – President, Lawyers Committee for 9/11 Inquiry

Dear Honorable Madam Haines and gentlemen,
I write to your good offices today to express our serious concern regarding aviation safety and security issues related to the events of 9/11 and other aircraft incidents that negatively impacts the safety of airline passengers and aircrew alike onboard commercial jet aircraft as well as our national security interests.
I currently serve as director and international public spokesperson for a global grassroots effort called 9/11 Pilot Whistleblowers whose website is at www.911pilots.org and YouTube channel at 911pilots.
The purpose of our organization is to show that there were no hijackers at the controls of the 9/11 aircraft but that the aircraft were electronically hijacked through employment of a system called the uninterruptible autopilot that enables a remote source to take complete control of the aircraft autopilot and flight management computers and remotely guide the aircraft to its target destination. Once engaged, the pilots cannot disconnect this system.
Although Boeing patented the uninterruptible autopilot system in 2006, we have testimony to show that it was developed and produced in late 1996/early 1997 well before the events of 9/11.  9/11 Pilot Whistleblowers alleges that this system was not only employed to guide the 9/11 aircraft to their targets that day, but was also involved in the electronic hijacking of Malaysia Air 370, Malaysia Air 17, Metrojet 9268, and others.
Given that the technology exists to enable the weaponizing of a commercial jet aircraft in flight through a back door of a system that cannot be unpowered as it has its own power supply, we feel that this poses a serious threat to passengers and aircrew.
It is our contention that the 9/11 hijackers were too inexperienced to have flown the B-757/767 aircraft on those profiles at the altitudes and airspeeds reported, especially the Pentagon flight profile allegedly flown by Saudi Arabian hijacker Hani Hanjour. This profile was replicated in a B-757 flight simulator and flown by highly experienced pilots. Without exception, these pilots crashed the simulator prior to reaching the Pentagon.
It should be noted that not one single pilot was permitted to testify before the 9/11 Commission as to the absurdity of this ludicrous notion that those pilots were in command of the hijacked aircraft, particularly since they had never flown jet aircraft before.
In August 2020, on behalf of our organization, I filed a federal report with the Federal Aviation Administration via the FAA Hotline detailing this information while providing more than ample evidence to give cause for the initiation of an investigation into our allegations. After initially exchanging several email correspondences with this office and others within the FAA, the FAA Hotline Team went totally silent on me. I believe that I am being stonewalled by the FAA. Please refer to the attached letter recently sent certified mail to FAA Administrator Stephen Dickson for details.
The events of 9/11 were the greatest crimes ever committed on American soil in its history, a crime that has never been criminally investigated. (The 9/11 Commission did not constitute a criminal investigation).
Our organization, along with many other global 9/11 truth organizations, is demanding that, through the collaborative efforts of the intelligence community and the transportation and justice departments, an investigation be initiated into our claims that the 9/11 aircraft and others were electronically hijacked and not flown by the grossly inexperienced alleged Muslim hijackers.
The Federal Aviation Administration Hotline Team has been inundated by others and myself with a wealth of information concerning the issues addressed above and must be consulted by each of your departments for details.
I currently live in Islamabad, Pakistan with my Pakistani wife where we have resided the past eleven years. I may be reached at the home address above, captaindanhanley@gmail.com, (+92) 300-555-0644, or on Skype at live:captaindanhanley for additional information.
Your attention to this serious issue is greatly appreciated.
Very respectfully,
Captain Dan Hanley (retired)
Director – 9/11 Pilot Whistleblowers
Encl: Letter to FAA Administrator Stephen Dickson
Cc: FAA Administrator Stephen Dickson
David Meiswinkle – President, Lawyers Committee for 9/11 Inquiry