Multinational corporations have come to dominate the world of international politics

Jimmy Carter: The U.S. Is an “Oligarchy With Unlimited Political Bribery”

Corporations are not people too, no matter how many corrupt politicians and compromised supreme court justices say so.

“I’ve often heard it expressed, and rightly so, that when the Berlin Wall came down and the Soviet Union dissolved – all the Communist hardliners went to the Environmental Movement.  But when the Third Reich fell in Berlin, all the Nazis went to Wall Street.  Corporatism advances Globalism because economic control is in the hands of multinationals.

If your Congressional Representatives are honest they will tell you that catering to special interests is their form of job security.  How many times must the Supreme Court wipe their ass with the Constitution?  How many strings can you attach to a puppet president before he flies apart?

I fear we might be facing serious revolution sooner than we think because the rate of wealth transference in the World is reaching critical mass.  When the food runs out the shooting will start.  Corporations are writing our laws for us and we have become a complete oligarchy, a Fascist one.”  – Rob Cox – I Am The Face of Truth

The 'outrageous' 40-year-old film that predicted the future - NETWORK

Former news anchor Keith Olbermann called Jansen’s speech a “prophecy that has come totally and terribly true,” as the executive proclaims that multinational corporations have come to dominate the world of international politics.
RIP Ned Beatty

To ensure that our elections produce a democracy for all, we must overturn Citizens United and get big money out of our elections.” … The Supreme Court’s disastrous ruling in Citizens United made clear that a constitutional amendment would be required to address the outsized role of money in politics.    teddeutch.house.gov  –  Jan 21, 2021

Justice, Anthony Scalia appeared on “Piers Morgan Tonight,” saying that Thomas Jefferson would have agreed with his citizens united ruling because it allows for “more speech.” In his daily take, Thom takes on his defense of the ruling, and says it made Jefferson “do a barrel roll in his grave.” 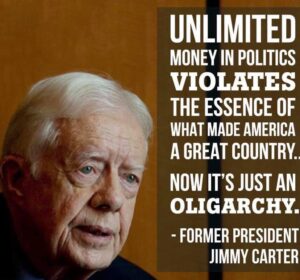 According to former president Jimmy Carter, Americans are now experiencing “a complete subversion of our political system as a payoff to major contributors.”

Please visit our “General Truth News” group on Facebook for some of the most responsible and informative posts online.  We especially thank Kevin Brant for all of his insightful posts.  –  Facebook.com/groups/GeneralTruth.News