The Criminal Destruction of 9/11 Evidence - Part 2

A person commits the federal crime of tampering with evidence when he or she knowingly alters, conceals, falsifies, or destroys any record, document, or tangible object with the intent to interfere with an investigation, possible investigation, or other proceedings by the federal government.

…the Port Authority of New York and New Jersey (PANYNJ) …is the quasi-governmental agency that directed the construction of the WTC towers, and managed the WTC complex for all but the last three months of its existence. The PANYNJ was created in 1921 to “run the multi-jurisdictional commercial zones in the region.” As a result of their authority, the PANYNJ was responsible for managing both the WTC and Newark Airport, two facilities involved in the terrorist attacks on 9/11. Within the towers, the PANYNJ was also a tenant, occupying much of the available space…

PANYNJ management includes an executive director and a board of commissioners comprised of twelve members.

On 9/11 the commission chairman was Lewis Eisenberg… and the executive director was Neil Levin, who had previously been Superintendent of Banks for New York State, and a general partner and vice president at Goldman Sachs. Mr. Levin died in the towers during the attacks, after having been in the position less than six months.

Past Commissioners of the PANYNJ included Robert R. Douglass, a close friend of David Rockefeller… [who] was accused of playing a major part in the underground economy, of being a main platform for money laundering and operating “hundreds of confidential accounts for banks so they could move money undetected.”

Seven PANYNJ representatives contributed to…. National Institute of Standards and Technology (NIST) …report, for which both professionals and 9/11 victim’s families have sought out formal correction… one [contributor] stands out for his authority and control over the facilities — Alan Reiss.
But what is most interesting about Alan Reiss is the evidence that he was not telling the truth after the attacks.  The first part of this evidence has to do with his surprising story of what happened to him on that day, and the visible evidence of his experience.
One problem with Reiss’ testimony is that people who had been “enveloped by [the] churning black debris cloud” were completely covered in dust. But Alan Reiss, who is said to have narrowly escaped the 1993 bombing as well, did not appear to have any dust or debris on him despite having been covered by the dust clouds.

An interview with Reiss just moments after the destruction of the towers, in which Reiss’ police escort turned his back on Reiss and appeared unusually uncomfortable, demonstrated this fact.

A second piece of evidence indicating that Alan Reiss was being less than truthful after the attacks includes this quote… “No one ever thought about a hijacked plane being rammed into a building.”

…several people Reiss would have known had thought about this very scenario, including the WTC tower’s design engineer, John Skilling. In a 1993 interview, Skilling said that, in the event of an airliner crash into one of the towers, “the building structure would still be there.” One of Reiss’ own staff members, Frank A. DeMartini, the Manager of WTC Construction, was videotaped explaining how the towers could have withstood multiple impacts from aircraft. Another person that Reiss would have worked with closely throughout the security upgrades, Brian Michael Jenkins, had also assessed the possibility of an airplane attack on the WTC.

From 1989 to 1998, Jenkins was the deputy chairman of Crisis Management for Kroll Associates. Kroll directed the PANYNJ’s response to the 1993 bombing in terms of security upgrades…

Because Kroll’s Jenkins led the analysis of future terrorist threats and how they might be addressed after the 1993 bombing, and Alan Reiss was the lead person in the PANYNJ response to the bombing, it seems very unlikely that Reiss was not aware of Jenkins’ prediction of “terrorists deliberately crashing a plane into the towers.”

Alan Reiss might have wanted to be untruthful about the events of 9/11 because he knew more about the attacks than he let on. But he certainly knew about the involvement of Kroll in creating the security program for the WTC complex after the 1993 bombing. And Kroll’s work is very relevant to this analysis. 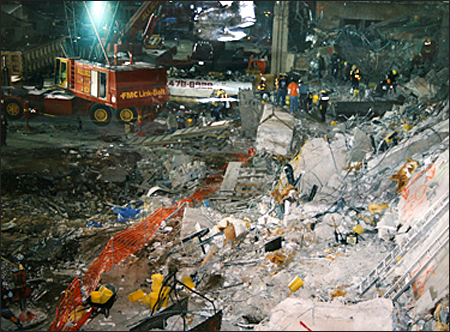 Prior to working for Kroll, Jenkins was chairman of the RAND Corporation’s Political Science department and he directed RAND’s research on political violence. He also had served as a captain in the Green Berets in the Dominican Republic and later in Vietnam (1966-1970). Later, in 1999 and 2000, Jenkins also served as an advisor to the National Commission on Terrorism, led by L. Paul Bremer. Jenkins returned to RAND after his stint with Kroll. Other RAND advisors during the times that Jenkins worked there were Donald Rumsfeld, Condoleezza Rice, Frank Carlucci of The Carlyle Group, Paul Kaminski of In-Q-Tel [the CIA’s venture capital firm] and Project for a New American Century (PNAC) co-founder, Francis Fukuyama.

Despite Kroll’s leading role in providing the security plan for the WTC, neither the 9/11 Commission nor the National Institute of Standards and Technology (NIST) mentioned Kroll in their respective reports.

Kroll calls itself “the world’s leading risk consulting company,” and was founded by Jules B. Kroll in 1972.

Kroll Inc. has been hired by some of the most powerful governments and organizations in the world. Beyond simply assessing risk, Kroll has operated as a private intelligence agency, and has been called “The CIA of Wall Street”.

At times, Kroll worked for corporations that wanted to find fraud or secrets within a given organization. In some cases, when corporations were threatened with hostile takeover, Kroll helped out by finding embarrassing secrets about the takeover company’s executives… Former CIA spies, FBI agents, and prosecutors were hired by the firm, and made as much as twice the salaries they made in the public sector…

By 1991, due to his experience with international investigations, Jules Kroll had developed an expert knowledge of the terrorist financing bank BCCI and how it moved and hid money all over the world. Coincidentally, during the same time that Jules Kroll was gaining this knowledge, WTC tenant L. Paul Bremer was managing director at Kissinger Associates, a firm that had been having meetings with BCCI but would not later reveal any details to the Senate’s investigation committee.

In 1993, American International Group (AIG), then led by Maurice Greenburg, bought 23% of Kroll. Greenberg’s son Jeffrey, a member of the Brookings Institution and the Trilateral Commission, left AIG two years later for Marsh & McLennan. Jeffrey Greenberg rose to CEO of Marsh in just four years and was still CEO when American Airlines Flight 11 struck the north tower, directly in the area where Marsh occupied the building. By 2001, Kroll was not only partly owned by AIG, but was also working closely with AIG on security issues.
In August 1996, as a result of the TWA 800 disaster, Kroll began issuing a monthly bulletin “that reviews air travel safety issues worldwide.”

In January 2001, Jerome Hauer, who had been Mayor Giuliani’s director of the OEM [Office of Emergency Management] from 1996 until February 2000, was hired to run the crisis management group at Kroll. Hauer had left the OEM to become vice president and associate director at SAIC’s Center for Counterterrorism Technology and Analysis. It is not clear if he spent only eleven months at SAIC, or if he continued to work there while also working for Kroll.

But on 9/11, Hauer was also serving as “a national security advisor with the National Institute of Health.” [Hauer advised the White House staff to take Cipro PRIOR to the 911 anthrax attacks.]

Mr. Hauer has been scrutinized due to his positions at the OEM and at Kroll, and for potential links to the anthrax mailings via SAIC. He has also been considered suspect due to the interviews he did on 9/11

Jerome Hauer was one of very few people who seemed to know exactly what happened to the WTC buildings, despite the fact that no skyscraper had ever collapsed for any reason other than demolition. His interview with Dan Rather on 9/11/01 was particularly insightful in this regard, in terms of Hauer’s ability to describe the official theory of impact and fire-based failure. In fact, when Rather asked Hauer directly — “would it have required the prior positioning of explosives,” Hauer responded quickly — “No…the velocity of the plane had an impact on the building…[it was] filled with jet fuel that burned [causing] intense heat [that] probably weakened the structure causing collapse.”

In May of 2004 Kroll was purchased again, this time by the WTC impact zone tenant Marsh & McLennan for $1.9 billion, “more than $100 million of which was pocketed by” Jules Kroll. Kroll Inc’s CEO Michael Cherkasky became the CEO of Marsh & McLennan after the deal, and he helped persuade his former protégé Eliot Spitzer to drop fraud charges that amounted to “cheat[ing] customers in an elaborate charade of price fixing and bid rigging.” The charges that Spitzer had brought against Marsh were the cause of Jeffery’s Greenberg’s resignation as Marsh CEO.

Larry Silverstein owned WTC building 7, and in May 2001, he also finalized a 99-year lease of the WTC complex and took over operation of WTC buildings 1, 2, 4 and 5 from the PANYNJ

Silverstein had hired someone to run the WTC complex for him. This was Geoffrey (Jeff) Wharton…

Wharton was a friend of Jerome Hauer, and through Hauer, Silverstein and Wharton met and hired an FBI agent named John O’Neill to run security.

Giuliani, Cherkasky and the BCCI Investigation

The terrorist financing bank BCCI was being investigated by US authorities “as early as 1983, 1984”, in an effort that began as an inquiry into drug money laundering. Despite these facts, BCCI was allowed to gain control of several American financial institutions, and was allowed to continue funding terrorism, without being prosecuted, for many years.

Kroll’s executive VP for Operations, James Bucknam, worked for Rudy Giuliani as an United States Attorney for the Southern District of New York (AUSA SDNY) in the late 1980s. Giuliani was the US attorney for the SDNY, from 1983 to 1989, and was in charge of investigating BCCI. It was reported that Giuliani received documents during this time, about secret bank accounts related to terrorist financing that were held by companies like Citibank, Barclays, Credit Lyonnais, and the Japanese company Nomura. What is less well reported is that, when Giuliani left his job as AUSA SDNY to start a political career, he worked for a law firm called White & Case that actually represented BCCI.

it is startling to review those who filled US Justice Department positions in the SDNY, around the same time, in terms of their importance to the official myth of terrorism and the role of Al Qaeda. This included Michael Chertoff, who was an AUSA SDNY and later became Homeland Security Secretary. Also, Michael Mukasey was a US District Judge for SDNY… Louis Freeh… [and] Patrick Fitzgerald…

Also involved in the BCCI investigation was assistant DA of New York County, Michael Cherkasky, who worked in the same job that Jules Kroll had worked during the late sixties and early seventies. From 1990 to 1993, Cherkasky was the chief of investigations for that office, and was therefore in charge of the 1993 WTC bombing investigation as well. Cherkasky later became an employee of Kroll during the time the company developed the plan for security at the WTC (1994 to 1997), then he became President and COO of Kroll while that plan was still being implemented (1997 to 2001), and ultimately he was the company’s CEO, from 2001 to 2004.

By the fall of 1990, the NY County DA’s office could not ignore the evidence of massive fraud at BCCI, as described through audits by Price Waterhouse UK. Unfortunately for all of us, although BCCI was closed, the money for terrorist funding got away.
http://www.911review.com/articles/ryan/demolition_access_p2.html